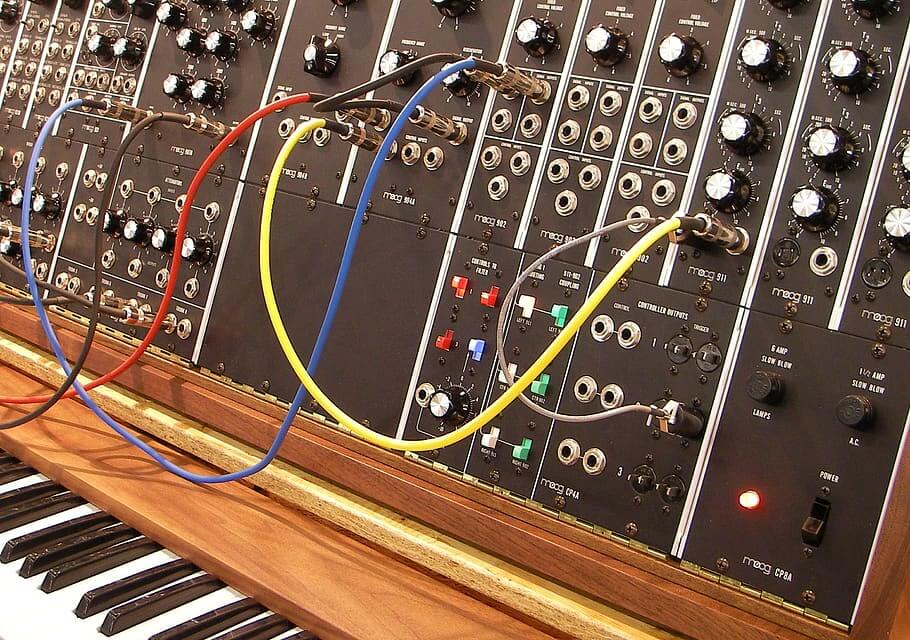 With the rise of fashion from the 80’s becoming popular in today’s time, it’s no wonder that music genres like Synthwave, New Wave and Disco Funk are making a comeback in the modern world. Bigger musical instrument companies such as Yamaha, Korg and Roland

picked up on- and is capitalising on this trend by bringing back some of their most successful synthesisers in new form factors while newer companies such as Artiphon and Teenage Engineering are using modern technology to reinvent the wheel (seriously, take a look at the Orba from Artiphon). Just like computers, synthesisers are becoming more and more powerful while decreasing in both size and price. So with all of this said, let’s dive into the world of synthesis and explore where they came from, its impact on modern music and where it is going.

Back to the Future: A Bit of History

The first synthesiser originated in the early 50’s, however it only became commercially available when Robert Moog created his first synth which was composed of separate modules each making their own sound or shaping it in some way. It’s worth noting that this too is the start of modular synthesis, but perhaps that is a topic for a different article. The first synthesiser available for purchase in music stores was the Minimoog which became available in the 70’s, and promoted a smaller form factor (which made it sort-of portable), polyphony as well as the ability to save patches.

With the rise of digital technology in the 80’s and the introduction of MIDI, the Sampling Synthesiser was born (a sampling synth or better known today as a sampler is an instrument that stores recorded sounds which can then be tweaked or processed before being reproduced). Sampling was first brought to life with the Fairlight CMI in 1979, but competition quickly grew as brands such as E-mu released the Emulator in 1981, and AKAI came out with their S-series in 1985.

The development of VSTi plugins in the 90’s as DAWs became more popular brought life to Software Synthesisers. Around the same time (and perhaps due to the widespread availability of the software recreations), analogue synthesisers regrew in popularity, making a massive comeback at much steeper prices.

So now that we know a little bit about where synthesisers came from, let’s take a look at where it is going and how it is evolving with modern technology.

What to Look Forward To

In Afrikaans we have a saying that goes: “Goedkoop koop is duur koop”, basically meaning that buying cheap will cost you in the long run. In the world of audio, you either get quality products which are expensive or you get cheap products which are affordable. A few companies are implementing the quantity over quality ideology and are making affordable units that are lacking either in their features, or in their build quality. An example of this would be the Korg Volca series which are a series of small form factor synthesisers at an affordable price, each created to fill one specific role within the signal chain – giving the buyer control over what they spend their money on (more on these later). Korg has always been known as a company that makes good quality products, and by cutting on some of the features they are able to create these dedicated units.

Another company picking up on this “dedicated” trend is Behringer – who on the other hand is known for making entry level products at entry level prices. However, in the synthesiser world, Behringer is actually one of the bigger names as they have produced a few legendary synths over the years such as the Crave and the Neutron. There has been news all over the internet recently about what they are currently working on, and one thing I am extremely excited for is the Behringer CS-Mini. The CS-Mini is a compact and portable reproduction of the Yamaha CS-80, arguably the most famous and most heard synth in the world, being used on albums by artists such as Michael Jackson, Bruce Springsteen, Paul McCartney and Kate Bush to name a few. Along with the CS-Mini, they are also working on a number of other mini synthesisers. The CS-Mini is rumoured to fall just under the $99 price tag, even with the chip shortage and other current events affecting the tech industry.

Hardware vs Software – The Dilemma

It is well known in audio that software replications of hardware products are widely available, some of which are indistinguishable from one another when compared side-by-side. Thousands of engineers worldwide have left behind the analogue world and joined the modern world of fully functioning digital studios. What used to require the size of a building to run can now be carried around on a flash stick that fits in your hand. Software synthesisers have many other benefits such as being much cheaper than their hardware counterparts, the ability to not only save but also store presets (on your computer) and full control of parameters through your DAW. The fact that you can simply download them from a website also helps. So if software synths are all the rage then why are hardware synths still being made?

A lot of producers argue that stepping away from the mouse and keyboard and getting hands-on with an instrument such as a synth makes all the difference between getting into the zone or messing around with parameters until you get bored. The fact that you pay a lot more for hardware synths also means that you will use it more – you know what you wanted and that’s why you got it. Arguably the biggest factor favouring hardware synths however is that they are much better catered towards performance than their software counterparts.

It is important to mention that both hardware and software synthesisers can be controlled by MIDI controllers. You even get hardware units that are made specifically to control a certain software through MIDI connectivity such as the Native Instruments Maschine Mikro.

The Korg Volca series (See picture below) consists of a dedicated FM Synth, Keyboard Synth, Two Different Drum Machines, Two Different Bass Synths and even a tiny modular synth. There is also a volca mixer available in case you get more than one of these and want to do performances. However, Korg is not the only company creating fun-sized dedicated units and making them available at low prices. Teenage Engineering have come up with calculator sized units called the Pocket Operator series (no, seriously – they fit in your pocket)! Whether you are looking for a drum machine, lead synth, bass module or even a sampler, they have it all!

Where to Get Started

It is always difficult to recommend a good starting point when it comes to anything in audio. The first question that comes into mind is “what do you want to achieve?”, and then “what is your budget?”. It is important to know what you are looking for and how much you are willing to spend. It also really depends on how much you know about synthesisers. FM units (Frequency Modulation) can control sound waves in a way that other units can’t, however samplers can record sounds around you and shape those into new and different sounds. Drum machines are dedicated to providing you with a beat (essentially replacing a drummer), and with bass units you’ll be able to create sounds that keyboard units won’t be able to.

A good starting point for someone who knows absolutely nothing about how synthesisers work and how they can be used to shape audio would be a complete modulation unit such as the Korg Volca Modular. However, it is worth noting that there is FREE software called VCV that is extremely powerful. So if you want to learn about modular synthesisers then that’s where you should get started. If you don’t have access to a computer however, then you can also download a mobile app called Hexen which has a free version where you aren’t able to save patches – but you can still use all of the modules.

If you are looking for something that is catered towards writing full songs or sketching out ideas, then maybe a Groovebox is what you need. Most Grooveboxes combine synth engines with drum machines, giving you a fully standalone unit that can be used to write songs on. They normally have 2 synth voices, one for lower frequencies to create bass sounds, and one for higher frequencies to create chord and lead sounds. They also normally allow for 4 track recording: 1 for drums, 1 for bass, 1 for chords and 1 for leads. Because of their abilities, grooveboxes are normally much more expensive than dedicated synths so if you are just starting out and are looking for something affordable then I would suggest you get the Roland MC-101 or the Novation Circuits. Teenage Engineering also has a dedicated groovebox unit called the PO- 20 Arcade. It costs a third of the price of the other two units I mentioned, but it is only able to produce 8-bit sounds.

The Odd Ones Out

A few manufacturers are coming up with unique ideas, blending the worlds of software, hardware and MIDI controllers. Earlier I mentioned a company called Artiphon. Their business model is creating unique instruments that are meant to make pro musicians feel like beginners and beginner musicians feel like pros. Their first instrument, “Instrument 1” is a standalone synth guitar that can also be used as a MIDI controller… However, I’d like to shift focus to their second instrument, the Orba. The Orba is an orange sized ball that is a standalone groovebox, bluetooth MIDI controller as well as a synth that you can control from either your smartphone or your computer. The Orba is also much less expensive than the other grooveboxes mentioned above, so this might also be a good place to start.

Other odd instruments include the Melodica, Haken Continuum, Roli Seaboard and Piano Arc… But I’ll let you explore these on your own.

The smartphone world is constantly evolving as fierce competition between rival companies are pushing technology advancements to their limits. The phone that is currently in my pocket is stronger than the computer I used when I first started recording… By a long shot! With all of these advancements being made in technology while smartphone prices are dropping, why are synthesisers becoming more and more expensive? It might have to do with the fact that a dedicated hardware synthesiser unit is created for an extremely narrow niche while smartphone companies cater for literally everyone on earth. With all of this said, there are a few companies bringing the audio world to your pocket, using the technology that you already own.

Some of the smartphone apps that I use and can recommend include FL Studio Mobile (A full DAW), Korg Kaossilator (Yes, this is literally a smartphone app version of their Kaossilator unit), Beatonal (a groovebox app) and Hexen (a modular synthesis app that I mentioned earlier).

If you would like to try a very simplified groovebox for free, you can download Beatonal on your phone. To unlock its full potential you will need to buy the full version (which is only around $5), but even the free version should be enough for you to see if it is something you would be interested in. The Korg Kaossilator App is also a groovebox but unfortunately you will have to pay for this one!

I read something the other day: “Software leads to hardware, and hardware leads to modular… and modular never ends”. So take that as a warning… once you join the crazy world of synthesisers, you may never leave… whether you start with a fully fledged groovebox or a simple MIDI controller, once you start it won’t stop.

If you are still interested however, I recommend checking out some of the free apps and software synths that I mentioned above before buying anything!

3 Likes
Prev
Next
Back To Top